Spacewalking is a critical part of a space mission and a rather difficult yet intriguing activity for the crew. The mission of NASA is fundamentally dependent on human spaceflight. Space exploration has been a real challenge from lunar exploration until the building of the International Space Station (ISS). It is also an activity that needs proper and advanced preparation for the astronauts to be able to perform it safely while being in the galactic sphere and outside their spacecraft. So, where does this whole spacewalk thing takes place on earth? It all happens in a specially organized place, called Neutral Buoyancy Laboratory (NBL).

A human crew’s mission demands careful planning, preparation, and study. A spacewalk is one of the elements of a crucial mission, along with the crew. The astronauts will practise on July 1 at the Sony Carter Training Center in Houston, Texas, where NASA’s Neutral Buoyancy Research Institute (NBL), one of the world’s largest indoor swimming pools, is located. NASA uses NBL pools to create flight protocols, test equipment compatibility, train astronauts, and perfect spacewalk techniques.

The Neutral Buoyancy Laboratory (NBL) is operated by NASA and it is where the simulating and the improvement of spacewalk procedures happen as well as the testing of the equipment and every other component necessary to conduct a mission successfully.

The NBL is located at the Sonny Carter Training Facility, near the Johnson Space Center in Houston, Texas. It is a training facility where neutral buoyancy is created and thus experienced by the space crew of upcoming galactic missions.

A large neutral buoyancy indoor pool is the central feature of the establishment along with other specialized equipment that aims to test and seal the success of a space flight.

The main goal of the creation of such a center is to train astronauts in an environment that simulates space’s microgravity environment along with the appropriate suits they were during a space flight. Astronauts perform simulated EVA tasks, meaning a number of activities done by them while being outside their spacecraft beyond the Earth’s atmosphere.

When it all began

The International Space Station is still a feat of engineering, whether you consider it to be the biggest laboratory ever built for humankind or the most expensive white elephant ever sold. The International Space Station (ISS), which has been held together by humans for more than 17,500 years while skipping at 200 mph, is wider and length than a football field and weighs close to 450 tonnes (although its exact mass depends on the number of consumables currently on board). Its assembly required the launch of 37 space shuttles, not including the additional Russian components, the Soyuz crew maintenance components, or the Progress supply maintenance components.

Now, in order to connect the components, a total of 155 spacewalks would’ve been required, 2.5 times as many as has ever been necessary during the whole history of manned spaceflight. Their spacewalks required meticulous planning and numerous practise runs.

It was needed when

In addition to the obvious issues of your tools floating away, it is unfortunate for astronauts and engineers that assembling things in microgravity is different from assembling them on Earth. This is because the human mind is not accustomed to accounting for the weight and mass of objects as separate properties. Therefore, it is recommended that the spacewalk practise be done in a setting as close to microgravity as possible.

It was not until the late 90’s that NASA started to consider replacing the previous neutral buoyancy training center, called Weightless Environment Training Facility (WETF).

The WETF was built at Johnson Space Center and had been for a long period of time the training place for many astronauts. However, the pool of that facility was way too small to hold mock-ups of space station components and other alike equipment, intended for the Space Station Freedom or the International Space Station.

The establishment was initially owned by McDonnel Douglas before NASA purchased it from him at the beginning of the 90s. NASA reformed it to create a neutral buoyancy training center in 1995.

The pool is divided into two sections in order to permit the execution of parallel training sessions. Its water is recycled every 19.6 hours and is monitored in a way to maintain a steady temperature of 82°–88° Fahrenheit (28o -31o Celsius), for eliminating the danger of hypothermia for the training staff that also dives with the trainees. The water is also being chemically treated to control contaminant growth while minimizing the potential corrosion effect on the equipment

The facility contains full-size replicas of International Space Station (ISS) modules and payloads, along with visiting vehicles such as the Japan Aerospace Exploration Agency (JAXA), the European Space Agency ATV, the SpaceX Dragon, and the Orbital Sciences Corporation Cygnus.

Since they were no longer required for training, complex mockups like the Hubble Space Telescope and the Payload Bay of the Space Shuttle were taken down.

Space missions that involve human crew members demand in-depth, exact planning, and preparation. In Neutral Buoyancy Laboratory, astronauts learn to experience spacewalking in zero gravity at its closest. It is one of the most crucial parts of the whole complex space exploration endeavor. They may not achieve real weightlessness but the facility offers them a concrete spacewalking foundation to prepare them in the best possible way for the extravehicular activities they will conduct in real zero gravity.

NBL is that place on earth where you can spacewalk without having to take off the ground. Literally.

The wishbone arrangement is the shape of a mock-up in water. You’ll see that the mock-up has a straight section where the mock-up bends in the image below. You can pool as many of the mockups as feasible with this configuration. 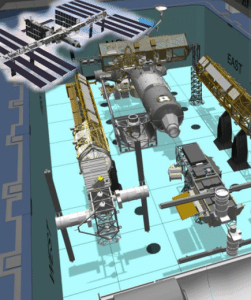 Ever wondered about what Mars looks like? Take a sneak peek at a Mars virtual tour