Full-scale engine development was finished in 2015. Blue Origin intended its first crewed test flight for 2018, but it was postponed until 2021 while testing proceeded in 2016 and 2017. New Shepard has sent 32 people into space as of August 4th, 2022.

On May 5, 2021, tickets for commercial flights carrying up to six passengers became available.

A crew capsule and a booster rocket make up the one-stage rocket known as New Shepard. Six people can fit inside the capsule. The capsule is propelled to a height of over 100 km by the booster rocket, which is propelled by a BE-3 liquid hydrogen and liquid oxygen engine. At this altitude, the passengers can enjoy a brief period of weightlessness before the capsule descends to Earth.

The spacecraft is meant to be completely reusable, with the booster rocket and capsule parachuting down to Earth and landing vertically on the surface. As a result, space tourism becomes substantially more affordable for the general public thanks to Blue Origin. The New Shepard vehicle has been launched and landed safely 21 times by Blue Origin.

In 2015, a multi-year program of flight testing was launched, and it ran through 2021. Midway through 2016, the test program was well enough along that Blue Origin started launching suborbital research payloads for academic institutions and NASA. The first trip bringing people to suborbital space took place in July 2021 after the flight-test program was finished in early 2021.

On 29th April 2015, the full-scale New Shepard vehicle, known as “Tail 1,” made its inaugural flight, reaching a height of 93.5 kilometers (58.1 miles). Although the test flight was considered successful, the recovery of the capsule via parachute was also successful. The hydraulic pressure in the vehicle control system failed as the vehicle descended, causing the booster to crash land and not be retrieved. The RSS Jules Verne was the name of the capsule.

A second New Shepard vehicle, NS2, was created following the destruction of NS1. On November 23, 2015, it took off for its first flight. And was the second test flight for New Shepherd as a whole. It successfully recovered both the booster stage and the capsule, ascending to a height of 100.5 kilometers (62.4 miles). The booster rocket executed a powered vertical landing successfully. This was the first successful rocket vertical landing on Earth after reaching a height of more than 3.140 km.

According to a report by Jeff Bezos, Blue Origin intended to build their orbital vehicle’s booster stage using the same design as New Shepard. Blue Origin successfully replicated the flight profile of the launch on November 23, 2015, using the identical New Shepard vehicle, on January 22, 2016. Following its launch, the New Shepard spacecraft reached a maximum height of 101.7 kilometers (63.2 miles), separated, and then safely returned to Earth in its entirety. This feat proved New Shepard’s reusability and a 61-day turnaround.

Once more, the capsule used parachutes to drop, but this time it only deployed two during the test fall. After that, it briefly rocketed forward using a retro rocket to lower the ground impact velocity to 4.8 km/h. The descent was slowed to 23 mph with only two parachutes, rather than the usual 16 mph with three parachutes. Through energy-absorbing deformation, crushable bumpers are employed to further lessen the impact shock of landing.

On October 5, 2016, the NS2 propulsion module underwent its fifth and last test flight. The main goal was to accelerate the passenger module to the point of maximum dynamic pressure at transonic speed and test the in-flight abort mechanism in flight. Blue stated that NS2 would be decommissioned and made into a museum item if it survived. This is because of the subsequent buffet and forces that impact the propulsion module after the high-velocity separation of the passenger capsule that is outside the design region of the PM. The flight test ended up being a success. NS2 completed its climb to space, had an abort, and then safely landed for the fifth and final time.

Together with the capsule RSS H. G. Wells, New Shepard 3 (NS3), also known as “Tail 3,” was updated for higher reusability and improved thermal protection. It features a new propulsion module and access panels for faster servicing and better thermal protection. The third propulsion module constructed is called NS3. Even though some of its parts were constructed as early as March 2016, it was finalized and dispatched to the launch location by September 2017. Flight testing started in 2017 and went through 2019. Windows-equipped Crew Capsule 2.0 is included inside the NS3. No people will be transported on NS3; it will only be used to fly freight.

The first flight test of it was on December 12th, 2017. It was the first flight performed within the US Federal Aviation Administration’s regulatory framework using a launch license. Prior test flights had been conducted under an experimental authorization, which prohibited Blue from transporting commercially compensated cargo. The NS3 mission, which carried 12 experiments and a test dummy called “Mannequin Skywalker,” was the first payload-only revenue trip as a result.

After the inaugural flight, “The vehicle has been receiving modifications from Blue Origin that are mostly focused on enhancing operability rather than performance or dependability. These improvements took longer than anticipated “causing a pause in test flights of many months. On April 29, 2018, the second test flight took place. The fourth NS3 flight and the tenth New Shepard flight were rescheduled due to “ground infrastructure problems.”

Blue postponed the launch till early 2019 after doing a diagnostic on the first problem and finding “other systems” that also need repairs. The flight took off on January 23rd, 2019, and reached space successfully at a height of 106.9 kilometers (66.4 mi). On two consecutive missions in October 2020 (NS-13) and August 2021, it was utilized to test SPLICE (“Safe and Precise Landing Integrated Capabilities Evolution”). It is a NASA lunar landing technology demonstration (NS-17). After a booster engine anomaly caused the in-flight abort system to activate on September 12, 2022, New Shepard 3 was destroyed during the NS-23 mission after it hit the ground. This was NS3’s seventh trip, and there were no passengers on board.

The fourth propulsion module produced, New Shepard 4 (NS4), also known as “Tail 4,” which flies with capsule RSS First Step, was the first to transport human passengers. Bezos was a traveler himself. The vehicle was created in 2018 and transferred to the Blue Origin launch site in West Texas in December of the same year. The NS4’s unmanned first launch took place on January 14, 2021. On July 20, 2021, NS4 was successfully launched with four people on board, including Jeff Bezos.

NS4 successfully took off and landed on October 13, 2021, carrying four people, including William Shatner. The Blue Origin NS-19 was successfully launched into orbit on December 11, 2021. TV celebrity and former NFL star Michael Strahan, Laura Shepard Churchley, who made her first space voyage 60 years after her father, and four other persons were also on board the spacecraft. This was the first occasion that New Shepard transported all six of the intended passengers. The fourth crewed flight, which included a Blue Origin employee and five additional passengers, took out on March 31, 2022. On 4 June 2022, the fifth crewed flight took place, and on 4 August 2022, the sixth crewed flight occurred.

The pressurized New Shepard Crew Capsule has a six-person capacity and a “full-envelope” launch escape technology that allows it to detach from the booster rocket at any time during the ascent. The capsule’s interior space is 15 cubic meters (530 cu ft). Aerojet Rocketdyne is the supplier of the Crew Capsule Escape Solid Rocket Motor (CCE-SRM). Two or three parachutes are released after separation. Retro rockets are launched just before landing.

The New Shepard propulsion module uses a Blue Origin BE-3 bipropellant rocket engine that burns liquid oxygen and hydrogen. Blue Origin conducted early research on both the BE-1 engine, which utilizes monopropellant hydrogen peroxide as its fuel. And also on the BE-2 engine, which employs a high-test peroxide oxidizer and RP-1 kerosene fuel. 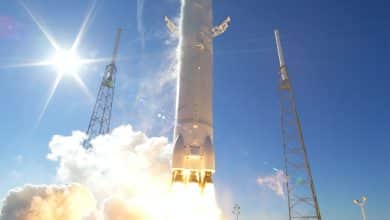